The main timeline includes a waveform generated and cached when the video for the current project is first opened. For some video and audio files, a waveform cannot be generated. In that case, the waveform will be blank. See Tips & Tricks for ideas how to solve this. The main timeline is also used for managing sync-codes.

To control volume and manage video-cues, another independent video-cue timeline/waveform associated with the media source in the primary video panel is available.

Some tips for using all timelines

The main timeline displays the current time at the position of the playhead, the highlighted selection interval (looping) and the total length of the audio or video source.

Selecting and locking a specific waveform or audio source

If your Project has multiple media sources, and more than one is activated in your current Transcript via the Media Manager, then you can independently decide which waveform is displayed on the timeline and which audio track is played:

This is useful with complex multi-source projects in which you wish to view one video in the video panel, while playing the audio track of another and displaying the waveform of a third media source (eg. an audio recording from a wireless mic).

There are several ways to loop shorter segments of the timeline: 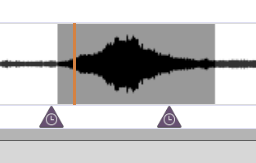 The waveform on this timeline is independently scrollable and zoomable, yet the playhead and selection will synchronise with the main timeline. The video-cue timeline can be shrunk down by clicking on the arrow button. The video-cue timeline controls the basic audio levels of media sources. To mute and unmute the audio, press the M button. To adjust the volume, press the speaker button and slide the volume up and down.

Furthermore, a prime use of the video-cue timeline is to manage video-cues that control how the current active video is displayed in the video panel.

A complete list of commands and shortcuts is available.